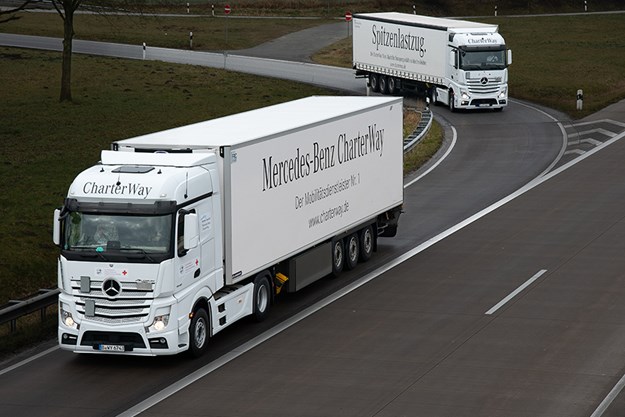 In news from Stuttgart, Germany, Daimler Truck and its employees from all over the world are sending a multitude of strong signs of solidarity with the people of Ukraine in which it says is a difficult time of war.

As an immediate measure, the executive board of Daimler Truck approved a monetary donation of one million euros to the United Nations Children's Fund (UNICEF).

In addition, the manufacturer is providing trucks and buses as well as touring coaches for aid deliveries free of charge, as well as donations in kind and personnel support for targeted support campaigns. Currently, employees can donate and the company says it will match the amount collected at the end.

Daimler has been providing trucks and buses as well as touring coaches for aid deliveries free of charge, as well as donations in kind and money for targeted relief efforts.

Daimler Trucks says its truck aid convoy with five Actros semitrailer trucks started in mid-March. Setting off towards Poland from the commercial vehicle centre in Würzburg via Neumünster and Eisenach, the vehicles transported 105 pallets of medical supplies to care for patients in the hospital in the Ukrainian city of Lviv. The cargo included water, disinfectant, hygiene products, food and medical equipment such as ultrasound machines.

Near the Ukrainian border, in the Polish town of Tomaszów Lubelski, relief supplies were reloaded onto Ukrainian trucks for further transport to Lviv.

At the end of March, the executive board, the General Works Council and the World Employee Committee of Daimler Truck launched a worldwide employee donations campaign: The approximately 100,000 employees in all regions where the company operates want to show their commitment. In this campaign, ending in mid-April 2022, they can donate money via a central page. After the end of the appeal, Daimler Truck will match the total amount of money that has been donated up to that point.

The matched total from the employee donation campaign will go to UN Refugee Aid, the national partner of the UN Refugee Agency (UNHCR), in order to help the people in Ukraine directly affected by the war as well as those fleeing and displaced due to the war.

In addition to distributing food, blankets, mattresses and other humanitarian supplies, UNHCR's recent activities have included supporting local authorities in setting up transit and reception centres in Ukraine and neighbouring countries. With the money raised from the employee donation campaign, Daimler Truck is helping the organization to further expand its activities and capacities throughout the region.

Jürgen Hartwig, member of the executive board of Daimler Truck AG for Human Resources, emphasises the solidarity between the company and its employees in order to jointly support the people in Ukraine.

"At Daimler Truck, it is very important to us to help the people in Ukraine. Because in many cases, the attack on the country has changed their entire lives from one day to the next," Hartwig says.

"We know that there is a great willingness among our employees worldwide to help the refugees from Ukraine.

"In a joint effort by companies and employee representatives, we are therefore launching a global fundraising campaign that will benefit UN refugee aid. We hope for a large turnout and look forward to matching the amount raised at the end.

With this donation, we are expanding the relief efforts already initiated for the people of Ukraine," Hartwig says.

Michael Brecht, Chairman of the General Works Council of Daimler Truck AG, says he is pleased about the straight-forward cross-border initiative.

"The war in Ukraine is bringing great suffering to the population and is a humanitarian tragedy.

"The joint donation initiative by the company, the General Works Council and the global employee representation gives us the opportunity to make our contribution to the people in Ukraine and at the same time demonstrates the global solidarity of our employees," Brecht says.

From the urgently needed donations, UNICEF (which does not favor any company, brand, product or service) buys items including food, clean drinking water, first aid kits, toys and winter clothing for the children affected by the war.

Another aid convoy of Mercedes-Benz Actros trucks is currently in preparation to haul medical supplies to help the population in the embattled city of Lviv. The trucks from Mercedes-Benz CharterWay and other divisions are being driven by Daimler Truck volunteers.